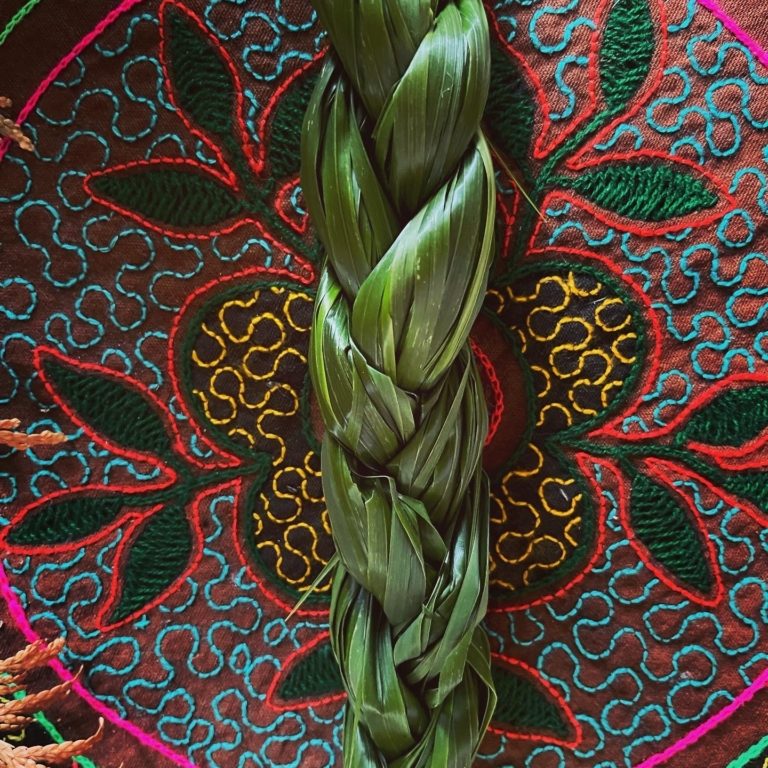 I first met Sweetgrass thirty years ago at a sweat lodge when an indigenous elder burned a braid of it before we went in, and the smell transported me to my childhood, sitting on my Pop’s lap, admiring his handsome grin while he smoked his pipe. The vanilla-like coumarin constituents make Sweetgrass’s unforgettable smell. I began to notice this plant, braided and wrapped in a circle, on the shelves at herb shops and crystal stores. In early 2000, my now late partner, Frank Cook, showed me Anthoxanthum odorata, or vernal grass, growing wild all around us. We would pick it and make little braids and dry them on our dashboard to burn in prayer later.

Then ten years ago, at our local annual herb festival, I was able to find Hierochloe odorata, our native Sweetgrass, at one of the vendors stalls and I brought it home to begin cultivating our relationship. I planted it in our family medicine spiral and several other grasses jumped at the chance to coexist with it, making it hard to separate out the actual Sweetgrass when harvest time came.

So I got the idea to grow it in a bathtub, its very own wet, raised bed, to make it harder for any other grasses to hop on board. I asked my parents if they could bring the old cast iron tub up for my birthday- the one that sat upside down in the back yard ever since they remodeled the old farmhouse my dad inherited from his grandparents. They were happy to bring it- that very tub I bathed in while staying with my great grands as a child! 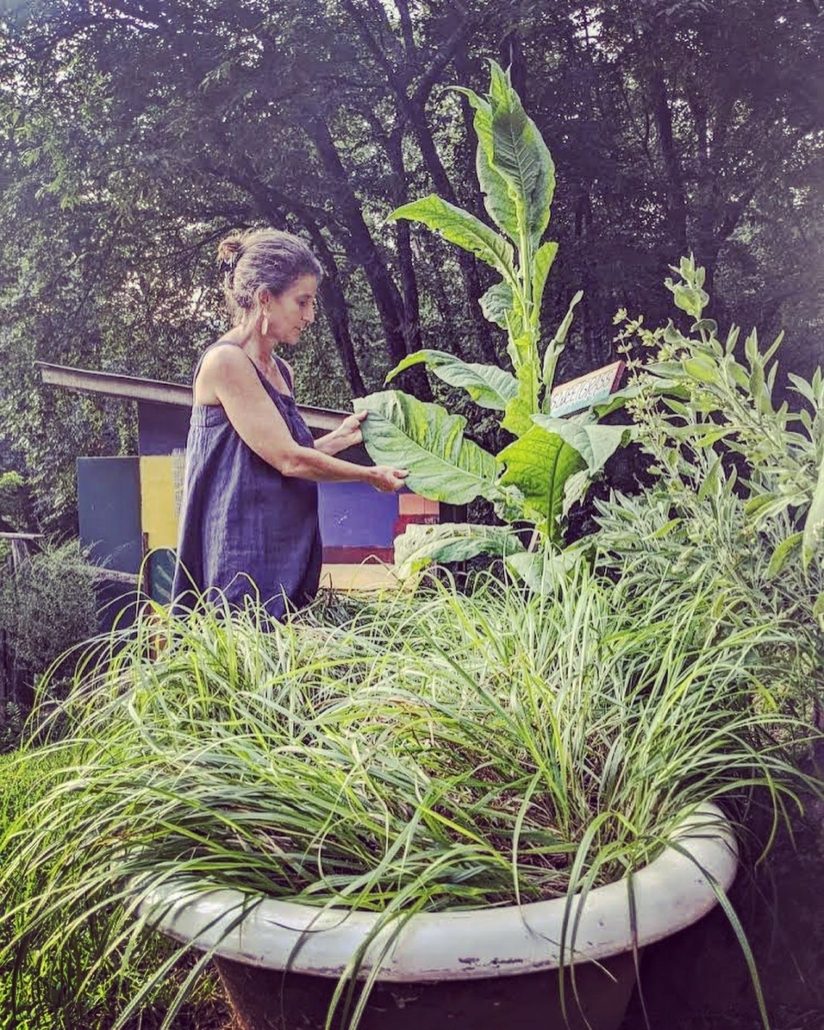 This year I’m growing Nicotiana rustica next to Sweetgrass, so they can commune. Every time I go to harvest, there is a Praying Mantis staring at me. I feel seen and heard. The plant and animal kin-dom are so gifted at validating our lives, don’t you think?

When I braid Sweetgrass, I wrap it in a small silk cloth then set it on my dashboard to dry. Otherwise the braid is likely to mold, our summers are so humid. The silk keeps the light out but lets the braid breathe. When my car smells like Sweetgrass, I know it’s dry. Then I store it in a plastic bag in between burnings, so it stays dry.

When I think about it, I actually met Sweetgrass as a child, when I would sit and watch the Gullah basket weavers take the dried strands and make them into beautiful baskets. This also reminds me how Sweetgrass is native to both the continent I call home, North America, and the continent that birthed my ancestors—Europe. In the Celtic tradition, this plant was strewn upon the floor and thresholds of homes and churches to release its smell and good fortune when walking upon it.

And I can’t complete this little post about Sweetgrass without mentioning the incredible must have book by Robin Wall Kimmerer, Braiding Sweetgrass, and sharing one of her passages from it:

“Knowing that you love the earth changes you, activates you to defend and protect and celebrate. But when you feel that the earth loves you in return, that feeling transforms the relationship from a one-way street into a sacred bond.”