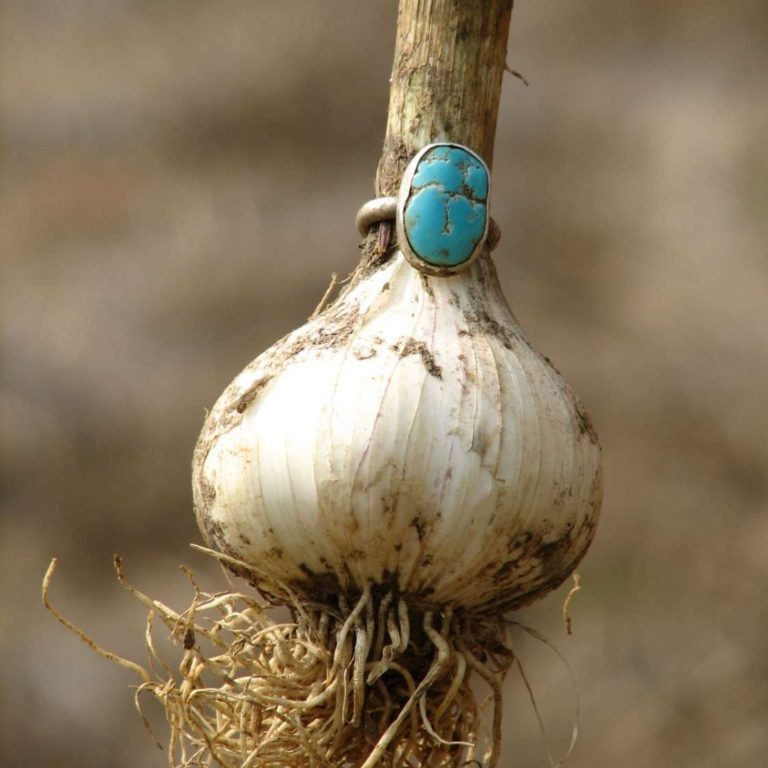 Mary Morgaine’s first introduction to Herb Mountain Farm and the Cosmincident that followed.

“Be very careful what you set your heart upon, for you will surely have it.”

In 2005, A friend called and asked me if I wanted to help her mulch a big field at a local farm before planting it in garlic, so I took up the opportunity for some extra work. I wanted to wean from my many hours of one-on-one work with special needs children and adults, and bring in more physical labor and outdoor work into my life. When I arrived at Herb Mountain Farm, I knew I had landed in a place that would play a significant role along my life path. I had no idea how significant that would be, though!

Hart, the owner of the farm, came out and gave us explicit instructions for mulching- exactly how we were to lay the hay so that the least amount of weeds could get through. Some of the hay bales were old and packed so tightly it was like wrestling a beast to pull away tufts of hay. Pitchfork by pitchfork, we spread the hay all over the half-acre field. It took days. I loved every minute of it though, as we sang while spreading the hay. Periodically I would stop to do cartwheels or handstands along the edge of the plot. I was outside and using my body, and I felt free in a way that had been frozen for years! I loved this work.

I stayed on for the garlic planting, and Hart and I hit it off quite well. He was full of experiential knowledge of organic farming, having done it for longer than I had been alive, and very generous. He saw that I was eager to work and asked if I wanted to give working there three days a week a try for a month, being a farm hand and groundskeeper- a general helper with whatever needed to be done around the property that I could manage. I said I would be honored, and thus my job at Herb Mountain Farm begun.

This work was more than I could have known to ask for, as far as honing my strengths and transforming my weaknesses. I became physically stronger than I had been at any time in my life and most of the time I worked alone (with Savannah my dog, always by my side,) so I had the chance to observe nature, sing and imagine, all to my heart’s content.

Several months of the year were dedicated to garlic, Allium sativum. Mulching, planting, weeding and watering the beds, harvesting, curing and storing, cleaning and then selling garlic, garlic, garlic. For the several years that I worked so intimately with the garlic, I had quite a purification happen. I understood why garlic was the herb used to scare off demons and vampires, for being in its presence so often brought to the surface old “demons” in me and helped send them on their way. Every one of us has shadow sides and most of us spend our life trying to avoid seeing them. I felt that working with the garlic left the uglies in me with nowhere to hide. It was some powerful medicine.

When I was not dealing with garlic, Hart taught me how to correctly prune fruit trees, build rock paths, prep and clean beehives, maintain the goose pen and chicken house, build and enrich the soil, grow an array of vegetables, transplant anything big or small, save seeds, clean out well cisterns, dig ditches, build swales, cultivate berry hedges, manage large tracts of land from bramble and bittersweet vines taking over, and more! In short, the years working for Hart taught me how to love and steward a piece of land with consciousness.

Hart was patient with me when I made mistakes and freely shared his knowledge with me on any topic. Not only was he an incredible employer, he was a friend. I had been learning organic gardening and sustainable living practices since 1993 and implementing them here and there, but working at Herb Mountain Farm allowed me to take this passion to another level and get genuine hands on experience in basic homesteading.

In 2007, during the planting of the garlic, I, unawares,  lost my special turquoise ring. When I was 19 years old, in the early 90’s, and living in Bellingham, Washington attending Fairhaven College at Western Washington University, I met a street vender who had a turquoise ring for sale—the thought of this ring kept drawing me back to his cart day after day. I finally came up with the $20 to buy it and felt so thrilled to have it on my finger.

It did not remain there well, however, as over the years I would lose it periodically only to find it again in the strangest of places. Usually I could not remember where or when I lost it, as though it had just vanished. When I would notice that it was no longer on my finger, I would wonder, “When did this happen?”

The stone itself had started to fall out of its silver setting and would disappear for weeks at a time. Once, I found it lying in the yard, a turquoise glow catching my eye. Another time someone found it in an auditorium after it had been missing for months. When I met a jewelry maker at a Nanci Griffith concert and asked if she could fix the ring, she agreed to put the stone into a new setting that would embrace it better, as well as fit my finger more securely.

So I left the ring, my address, and $50 with her, along with complete faith in its return. Three months later I received it in the mail, looking beautiful in its new band.

I wore it for a couple months, and then it disappeared again. This time it took missing for a year. I felt it would turn up again at some point. On the spring equinox of 2006, I completed my seasonal ritual of harvesting ‘black gold’–my worm castings compost pile. The months of kitchen waste had been transformed into three, 5-gallon bucket-fulls of beautiful soil. As I stored the buckets away for later use, I scooped out a quart of it to dress my houseplants.

As I spread the finished compost on my beloved ficus tree, the ring peaked out of the ‘black gold’.  I stared in awe, then grabbed the ring and went to lie down in my yard under the silver maple tree and just cried with the magnificence of the moment. The ring had spent a year in the transformation process of turning plant matter back into rich earth, which is some of the most basic, important work there is to a healthy planet, and so I felt like I had been crowned a queen to wear this ring again after what it had been through.

It stayed on for six months, until that autumn when it disappeared again. It was during the garlic-planting season at Herb Mountain Farm that it went missing.  But again, it could have fallen off anywhere, for when I realized it was not on my finger, I was in that spellbound place of wondering how long it had been gone.

About nine months later, I started thinking about my lovely turquoise ring. I said a prayer to the Almighty, “If this ring shows up again, I will never doubt your hand of Grace that rules my life. There will be no more room for worries or fears if this comes back to me yet another time.” Big statement, I know.

I had a gold journal that I called Ceridwen’s Cauldron in which I wrote down things that I wished to do or have; things that I do not have time to do currently in my life but hope to some day, or things I cannot yet afford, and other things that are beyond my control. I delegate these matters to the Great Mystery, where magic and miracles are always unfolding. I wrote down ‘The Ring’.

A couple days later, in June, I was harvesting the quarter acre or more of the fall-planted garlic at the farm with a group of women. One of the women on the other side of the field from me pulled up a garlic plant and gasped, for there was a ring at its base. I walked over and saw that it was the ring, my turquoise ring, attached at the base of the leaves and the head of the bulb!!! I asked to hold the stalk and immediately began trembling with such a powerful knowing of Divine love and the respect of being heard, that all I could do was cry with joy and in humbleness and lift up my arms to the heavens in praises. We were all in amazement! 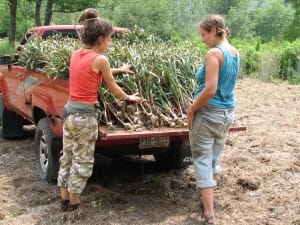 The ring had fallen off while I was planting the garlic cloves in the field, 9 months before!  Apparently a clove sprouted in the center of the ring and held on to it, underground until the garlic fully developed into its potential, bringing back the ring to light with the harvest.

I think of this as a cosmincident– a lining up with the cosmos- a celebratory event.

11 years later, Hart and I are almost at our journey’s goal of opening up a Learning and Lodging Center, the transformation and transition of Herb Mountain Farm. I see this being a place of healing, learning, growing and cosmincidences. I still think that ring, that piece of gemstone that originally grew in the deep veins of Mother Earth, by returning back to the soil and then the light of day, again and again, is in part responsible for this.